Genetic Determinants of Aging and Longevity

Aging is a natural process that all living things have to go through. It is characterized by the gradual loss of function and stability at the molecular, cellular, tissue, and organ levels. This process is often accompanied by the development of age-related diseases, such as cardiovascular disease, musculoskeletal issues, neurodegenerative diseases, and cancer. During the COVID-19 pandemic, the relationship between aging and the immune system became particularly important, as older individuals have a higher risk of developing serious complications and death from the virus compared to younger people. However, there have also been reports of 100-year-old individuals who have successfully survived COVID-19 (some mentioned in our recent paper).

The rate of aging and life expectancy can be influenced by various factors, including genetics, which is believed to account for up to 30% of the variation in human lifespan. It has been found that siblings of people who have lived beyond the age of 105 are 35 times more likely to live to 100 years old than the average population. While progress has been made in identifying genes and metabolic pathways that may be involved in extending the lifespan of model organisms, it is still unclear to what extent these findings can be applied to humans due to the complexity of human biology and society, as well as potential differences in lifespan and causes of mortality between species. 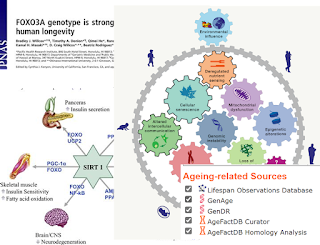 There are several genes that have been linked to longevity in humans. One such gene is FOXO3A, which is thought to regulate the aging process by controlling cellular stress responses and promoting DNA repair. Another gene, APOE, has been associated with increased risk of age-related diseases such as Alzheimer's disease, but certain variations of the gene have also been linked to increased lifespan. The SIRT1 gene, which is involved in regulating metabolism, has also been linked to longevity in some studies. Other genes that have been associated with increased lifespan include the Lamin A/C gene, the telomere-associated gene TERC, and the P16INK4a gene, which is involved in the regulation of cell cycle progression. There are several large databases of candidate genes associated with human longevity and aging including AgeFactDB, Digital Aging Atlas, AGEMAP, and a set of databases from Human Aging Genomic Resources (HAGR), helping researchers to study the genetics of human aging using modern approaches.

Recent molecular genetic methods have provided new opportunities for studying the genetic basis of human aging and longevity. This includes the examination of individual candidate genes in population studies, variations identified through the GWAS (genome-wide association study) method, differences in immune function related to aging, and genomic studies to identify factors of "healthy aging." By understanding the mechanisms behind the factors that influence lifespan and the possibility of regulating them, it may be possible to develop strategies for achieving healthy longevity.

Popular posts from this blog 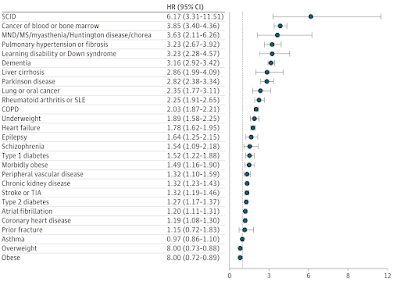 Age was found to be the most important characteristic associated with the risk of post-booster COVID-19 death  (panel A)  with an HR of 31.3 (95% CI, 26.1-37.6) for an 80-year-old individual compared with a 50-year-old.   Most of the risk groups were associated with an increased HR of post booster breakthrough death, except for congenital heart disease, asthma, and prior fracture. We note that asthma was identified as a risk factor after two doses, while age was not - likely because antibody response studies were focusing on younger cohorts.   This study population included those aged 18 to 100 years living in England who had completed both doses of their primary vaccination schedule and had received their mRNA booster 14 days or more prior to December 31, 2021. REFERENCES Nafilyan V, Ward IL, Robertson C, Sheikh A, National Core Studies—Immunology Breakthrough Consortium. Evaluation of Risk Factors for Postbooster Omicron COVID-19 Deaths in England.  JAMA Netw Open.  2022;5(9):e22334
Read more

Memory decline is common in aging and significantly worsens quality of life, but there are few, if any, effective interventions to improve episodic memory recall in older adults. And there are no effective interventions specifically targeting autobiographical episodic memory. A smartphone app called HippoCamera allows users to create memory cues of specific events that they personally value and hope to remember. These cues consist of a short verbal description and a short video recording of the event. The approach was shown to be effective tool for improving the recall of episodic memories in older adults. Seniors were able to improve their ability to recall episodic memories, increase the differentiation of hippocampal activity, and better remember the personal past. These findings suggest that using mobile phone technologies to record and replay episodic memories may be a feasible, low- cost, and effective way to improve memory recall in older adults (Adapted from SpinnerChef:  Spinn
Read more